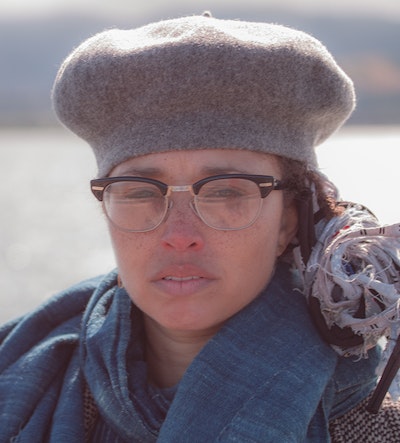 M is a visual storyteller working in cinema, writing, photography, and public art. Her films and writing combine a fictional and documentary narrative approach. Wired magazine called M a "filmmaker provocateur." PALM TREES DOWN 3rd ST. won the Adrienne Shelly Award and was called "a masterpiece" by Film Threat. The award-winning sci-fi MOONLESS was reviewed by Stigmart/Videofocus13. Obsidian Theater Festival produced and staged her play A Metaphor in 3 Acts. Her films have been screened around the world and are represented by Flourishing Films. Writings published in Forum Magazine, Obsidian Journal, Alternative Lit, and Undertone Mag include poetry, essay, and playwriting. She turns her CalArts M.F.A., into knowledge for the people as a hood educator, she sits on the board of School of the Alternative, offering affordable non-hierarchical arts education. Classes on film studies are also taught in open virtual and public spaces to advance discussions on the future of Black cinema. The curriculum includes: SCREENWRITING ROOTED IN DECOLONIZATION AND ABSTRACT THINKING, THE PRINCIPLES of GOOD STORY, BLACK FILM as PROTEST, and the 101 ESSENTIAL BLACK FILMS are taught in open virtual and public space to advance discussions on the future of Black cinema. Working as an Impact Producer, she has brought social campaigns and outreach to films, including Ayiti Mon Amour (2016), JINN (2018), Life After Life (2017), Solace (2018), and The Long Shadow (2015). She mobilized a grassroots Oscar campaign for Ayiti Mon Amour, Haiti's first selection into the Oscars in 2017. She also Co-Produced Dreamstates (2016) and produced Rwanda's first entry into Cannes 2021, Neptune Frost, directed by Anisia Uzeyman and Saul Williams. Her first feature, ELEPHANT, is in post-production. She can be found on Yelamu land named by settlers as San Francisco kicking around the fog.