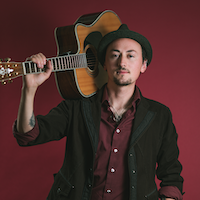 Music is my life. Growing up, listening to music and seeing my favorite bands was all I cared about. Now I’m a professional singer/songwriter who tours all over the West Coast. I love harmonizing. I also play drums for a ska punk band.

I started taking guitar lessons in 6th grade when the girl I had a crush on totally swooned over a boy she used to despise, simply because he played a song. Learning guitar didn’t win over my crush, but it completely changed my life forever. I started writing songs on guitar, and fell in love with the self-healing power of expression through music. I gathered some friends in high school and started an emo-punk band. As a shy person, performing for audiences was terrifying for me, but I viewed it as a necessary evil that comes with having a band. I would have an out-of-body-experience every time seemingly as an internal defense mechanism to cope with my overwhelming fear. I’d float up into the corner of the room and watch myself on the stage, often blacking out with little to no memory of what happened. It was bizarre and I didn’t tell anyone for many years. Til now, I’ve only met one other performer who that’s happened to. I kept with it though, and it slowly got a slightly better with every friend’s party, block party, fundraiser and small local gig we played. Senior year we did a battle of the bands that won us a slot performing to a giant audience at Slim’s in San Francisco, with all our friends there to cheer us on. I was blown away that my hard work had paid off with what was a much bigger achievement than I’d ever imagined at that age. In college I never found a career path that inspired me, but I kept making solo music on the side almost involuntarily. I blew off major assignments when a song would come screeching into my psyche and demand to be written that very moment. As friends joined me, my solo project slowly grew into a full Indie Rock band. We spent years cycling through different band members and playing plenty of shitty shows for every decent one. But after five years, I found that the group had stabilized into incredibly talented and dedicated musicians. That’s when people started coming to our shows and my stage fright transformed into genuine excitement. Before long we’d developed a sizable local fan base and venues and press started noticing us. Our band went way farther than I’d ever imagined. We spent the next five years touring across many states, opening for famous bands, and playing festivals. We released a six-song EP and the album release concert got a full page review in the most popular local paper. It was an existential crisis for me when that band ended. It had been such a big part of my identity even from when I was a teenager. I’d never even been an adult without being known as the singer of that band. I felt naked and lost. But the death of that band turned out to be a blessing in disguise because with it came a rebirth of inspiration and renewed dedication for me. I realized, unlike my band members who quit music to form families, that this was not just a fad for me. It was a calling. I started taking voice lessons and attending Song School in Colorado, honoring my voice as an instrument and my songwriting as a professional craft. I formed a guy/girl Folk duo with one of my best friends, utilizing a more intimate sound to showcase the strength of my lyrics and songwriting more fully. I made it my mission to go further and faster than my last band. We released twice as many EP’s in a third of the time, played live on radio stations, and broke heavily into the music video world, releasing seven videos by the time we broke up three years later. Unlike my old band we had developed fan bases in not only our home of the SF Bay Area, but also in Portland, OR; Seattle, WA; and my bandmate’s hometown of Nevada City, CA. I learned how to copyright my music and receive royalties, which sounds boring but was incredibly empowering. I never really believed in myself that I could reach my dream of becoming a full time music artist, but throughout my life I’ve continued to have an endless fuel tank for pursuing it. It was difficult to come to terms with the fact that I’m different from my family, who are all computer techies and lawyers. I’ve never had close role models for the path I’m on. But I’m figuring it out and recently more than ever it seems to be working. I announced a few months ago that I’m no longer starting band names as bands are fleeting, and I am going forward under my own name as a music artist. Magically, I immediately attracted a booker, manager, and indie label. I’m training a full band over the next few months and aim to quit my day jobs in 2019 to be a full time music artist